Girls Day Out and Lunch With Bugs 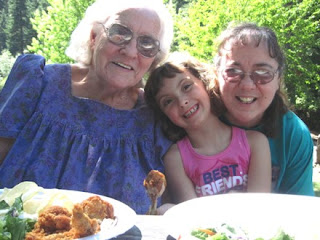 Grandpa's Gone, Coleen's bored and Grandma and Granny just want to get out of the house for a little while.  So we pack an "impromptu" lunch and head off to the mountains for a picnic.

Lunch is great and you can see that Coleen was ready to eat in this next photo: 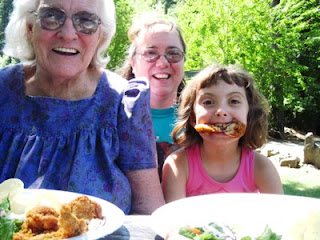 We did however have some unexpected lunch visitor's flying around and landing on our plates and in our hair.  Besides the normal pesky wasps (how do they find food so doggone quick anyway?)....there were loads (and I mean "LOADS" of.....
these critters everywhere. 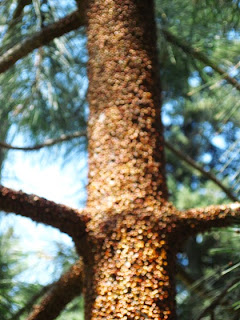 Can you guess what they are in this photo?  Yes, it's "blurry" but all that brown/orange stuff on the tree trunk is not bark.

Here are a couple more photo's... 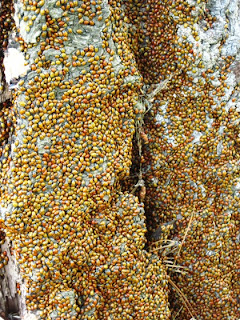 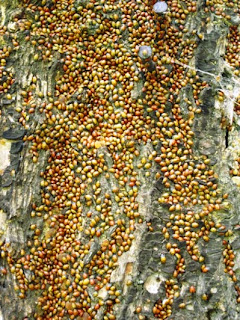 These are believe it or not....Ladybugs! - They were everywhere, especially on the trunks of all the trees.  You could see them flying around through the air as well.  Several landed in our Chicken box and I'd have to pick them out and set them free.  Thankfully none of us ate any! 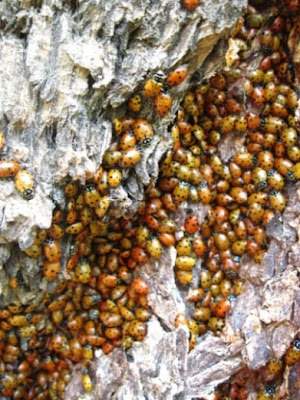 We didn't stay long because of the bugs but it was still a nice little outing.  One last picture up close before we go:

Would you believe there was a woman there trying not to step on any of them.  I mean come on...there were thousands of them everywhere so how could you possibly not step on at least one.
Posted by Ida at 12:50 PM No comments:

Hello! - Wow it's been a few months since I've posted.  Life got busy and sadly I didn't take time to post.  Never fear lots of pictures are about to appear as we play "catch-up" on what's been happening in my life.

May was one activity packed month.

We celebrated my oldest brother's 60th birthday May 6th (No pictures though, :o( as I didn't take my camera with me.)  He had us over for BBQ which we tried to eat outside but the weather didn't cooperate and it rained us back inside.

Sunday May 8th was Mother's Day.  Hubby gave me this beautiful hanging planter: 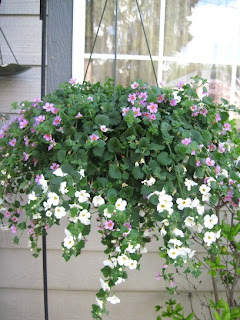 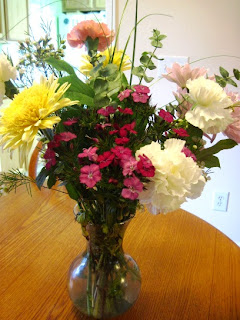 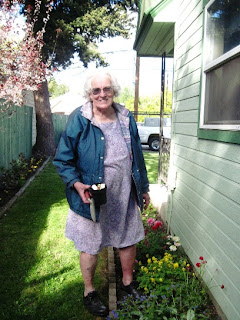 and Greta/Coleen gave me a lovely bouquet of flowers.Mike and Coleen fixed dinner (as Greta had to work until after 5:00) Here's a picture of them working on the Fried Chicken together. 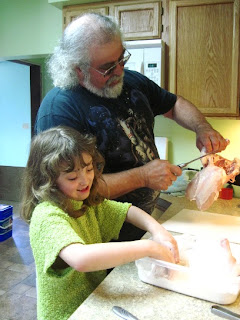 Of course I can't leave out my own mom so here she is planting the flowers that I gave her.  (She hates her picture taken so it's rare when I actually get one of her).
The next weekend was the annual Hot Air Balloon Stampede here in Walla Walla but again the weather was really nasty so the only day they launched balloons was on Friday and I did not get any pictures nor did we go out to any of the event activities.
May 20 was my hubby Mike's birthday.  Coleen made him a Maccaroni Motorcycle Masterpiece for his gift.  Here they are together with the picture of her masterpiece. 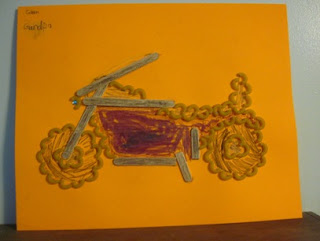 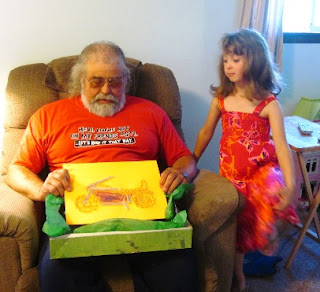 The next day was the Open House at the Vet Clinic where we take our pets.  Our Pug, Cricket was the May "Pet of the Month" so we spent the morning showing her off at the event.  They had Pony Rides for the kids, a scavenger hunt, bunnies, kittens, goats, etc...there.  So the next pictures were taken at that event.
First up Cricket meets Buddy who is another 3-legged pug.  He's missing his right hind leg and she's missing her right front leg.  They sure looked cute checking each other out. 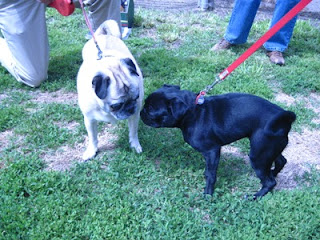 On one of the horses they painted the skeleton of what a horse looks like.  It was kinda freaky but yet, cool looking at the same time.  Coleen love this horse and spent the better part of the day petting it. 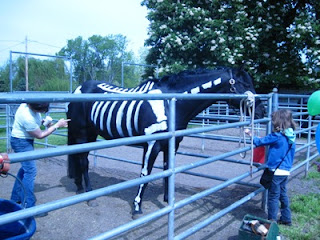 They had the cutest little goats there and I just had to get a picture of Cricket checking them out.  She didn't even bark at them which was good. 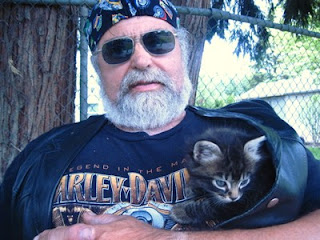 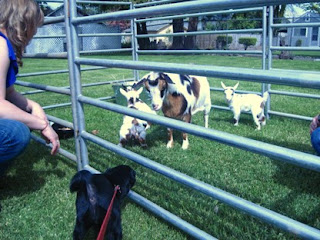 We tried to get Grandpa to let us bring this sweet little Kitten home with us.  He said, No but if it would have been me I would have said, YES! 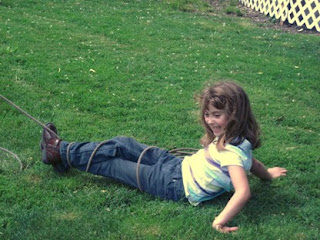 Coleen tried roping and then got roped herself.
We didn't do anything special over the Memorial Day weekend.  The weather was cold and rainy so we just stayed home and did stuff around the house.  My mom & I did take flowers out to the cemetery but we ended up having to buy most of the flowers as are had barely started growing much less blooming at the time.
Coleen had her end of the School picnic on May 25th and since mommy was working Grandma got to go in her place.  We had a super fun time.  Here's a picture of the two of us together at the picnic. 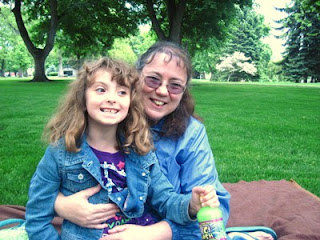 So that's it for May.  Come back later to catch the June activities.
Posted by Ida at 4:33 PM No comments: