It's back to school once again.  Where did summer go?

As is my tradition here are Coleen's back to school photos.

She wasn't in the "mood" for pictures and was rushing to get ready so they aren't the greatest and the sun was in her eyes.  I need to find a different spot for the photos. 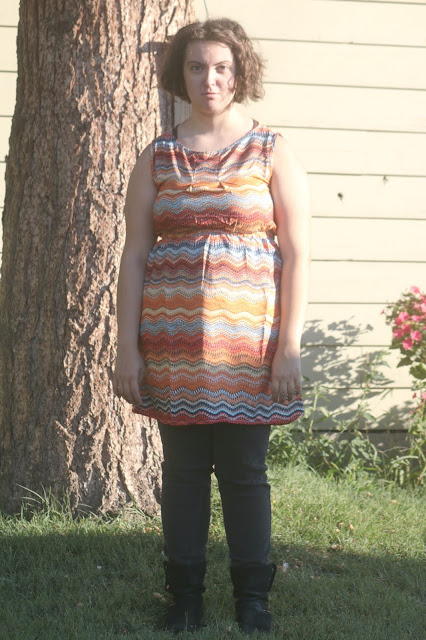 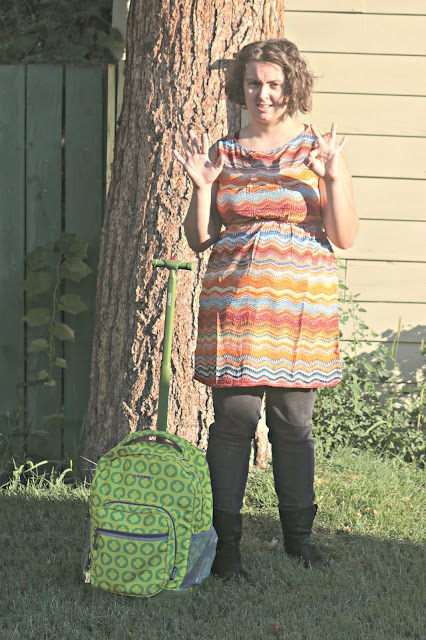 The hands are showing that she's going into 8th Grade.  Yep it's her last year in Middle School.  Time flies by so quickly.

She wanted shorter hair this year.
Posted by Ida at 9:28 AM 19 comments: 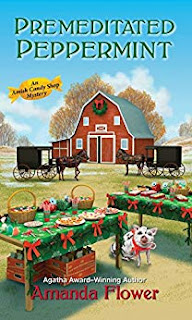 Today I'm reviewing Premeditated Peppermint by Amanda Flower.  - This is the 3rd book in the Amish Candy Shop Mystery series.

Amanda has created some wonderful character's in this series.  The heroine of the series is, Bailey King who has returned from New York to her hometown of Harvest, Ohio to help run the family Candy shop,  Swissmen Sweets.

She suddendly finds herself meeting back up with her ex-boyfriend, Eric who comes to Harvest hoping to rekindle their romance and also to promote his new television series.  He wants Bailey to help star in the series but there is a slight problem...first off the Candy shop is owned by Bailey's Grandmother who is Amish and they don't allow people to take their photo's much less film them.  The real (dare I say) fun begins when a member of the Production Crew is found murdered and all fingers point towards Bailey's ex.

Now it's up to Bailey and her Policeman boyfriend of sorts to solve this crime.

I don't want to spoil anything so that's as far as I'm going with the story plot.  I want to say that I really enjoyed the situations that Bailey finds herself in during this book.  Plus you will fall in love with Jethro...who might that be?  Well it's not who you think it is.   Nope not the boyfriend...Jethro is a pot-bellied pig and he was just hilarious.  See him there on the cover of the book.

This is a very easy to read book and a fun one as well.  If you aren't into quick, fun and easy to read murder mysteries then it's probably not your cup of tea but then again you never know you might like it.  I know I did.

You can order this book on Amazon HERE and guess what?  There is going to be another book in the series!  - I can't wait to read that one as well.

I received an e-copy of this book on NetGalley for my honest review.
Posted by Ida at 8:50 AM 8 comments:

I've been trying to get back into posting on this blog again but sometimes it's difficult to find the time to post and read posts.  At any rate I hope you still will want to follow me and continue to post comments when I am able to post.

I took a drive with my mom Thursday afternoon.  We drove up, Mill Creek and along the way up and back we spotted several groups of deer.  I'm sharing their photos with you today. 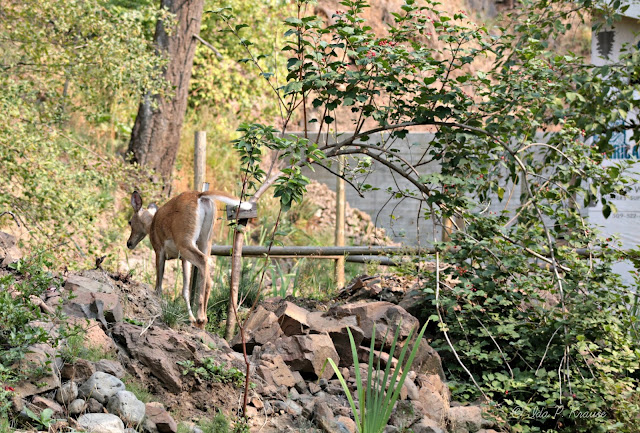 Spotted this one near a stream or pond and managed to snap a quick shot. 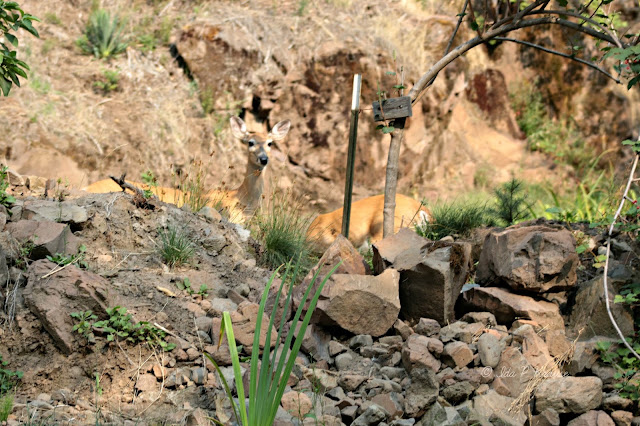 Turned around and drove back down and low and behold there were a couple more deer at the same spot.

Next up I spotted a nice looking Buck and a Doe in someones yard so I had to turn around to get on the same side of the road and managed a few shots of them. 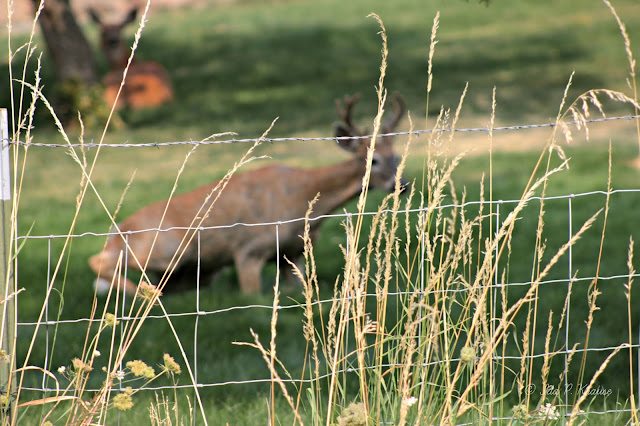 I hate it when my camera decides to focus on the grass and not the deer but it made for an interesting shot I think. 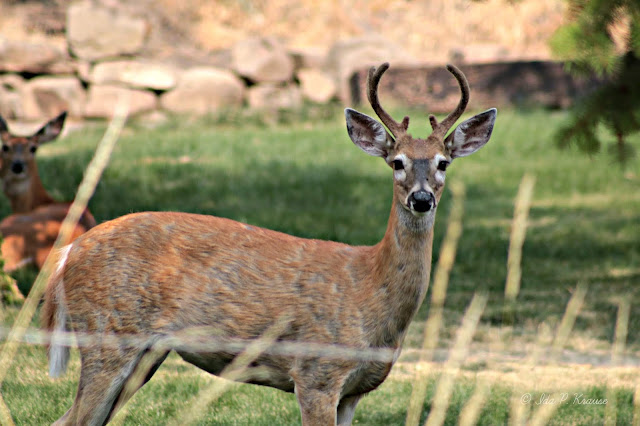 I finally managed a good shot of Mr. Buck after he stood up.  Nice Antlers. 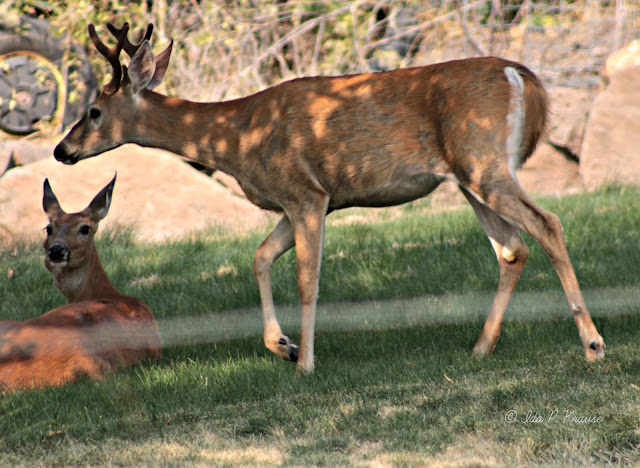 He wandered over to the Doe and I got a shot of both of them.  She sure was a nice bright reddish brown color.

Spotted one more Buck with a slight less impressive set of Antlers but they are impressive in their own "funky" way I think. 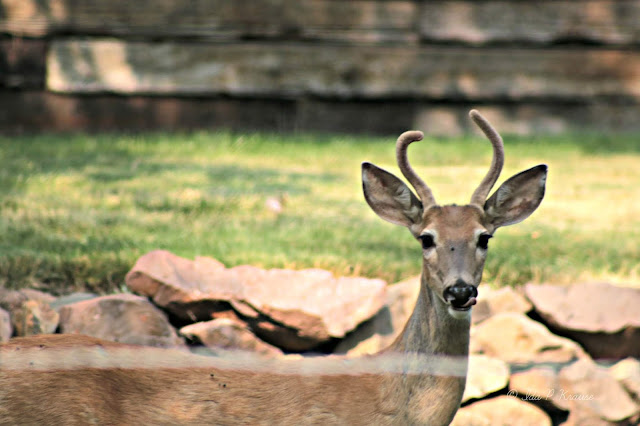 It's always fun to spot deer in the wild and get photos of them.  I hope you have enjoyed them as much as I did taking them.

Well once again I've been absent from posting but I'm back today to join in on Willy Nilly Friday Five and Feline Friday.

Up first for WILLY-NILLY FRIDAY FIVE


1.  Every summer I try to get a photo of a butterfly but most often or not they fly off before I can get a picture of them.  I managed 2 of this lovely Swallowtail before it took off.﻿ 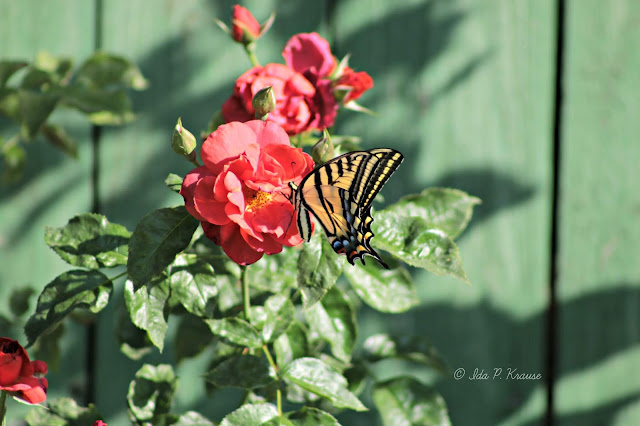 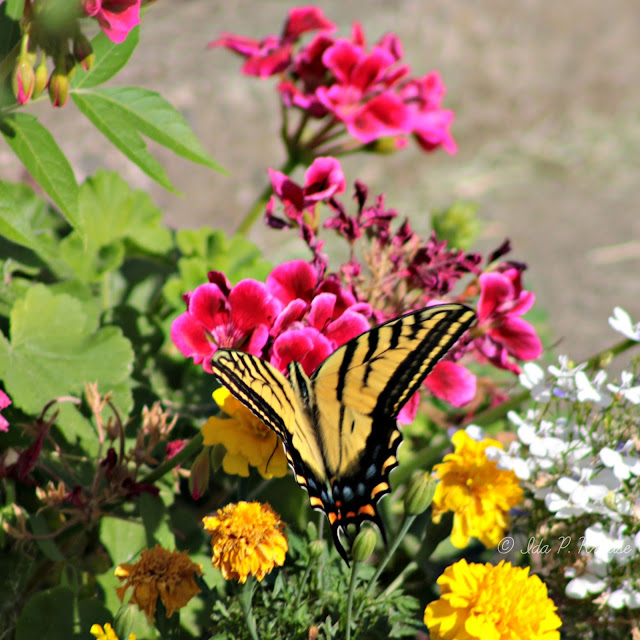 2.  Took a little drive earlier this month and spotted some Wild Turkeys. 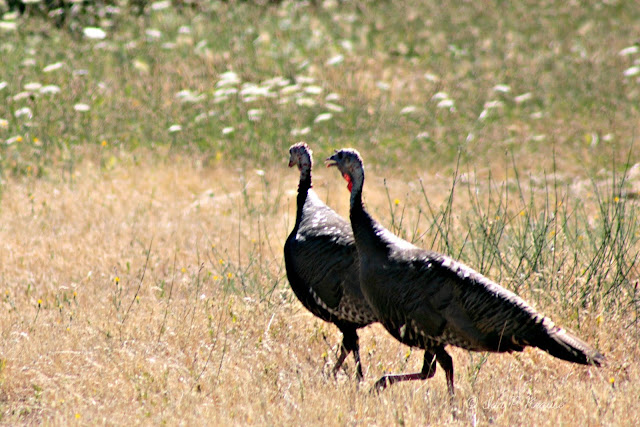 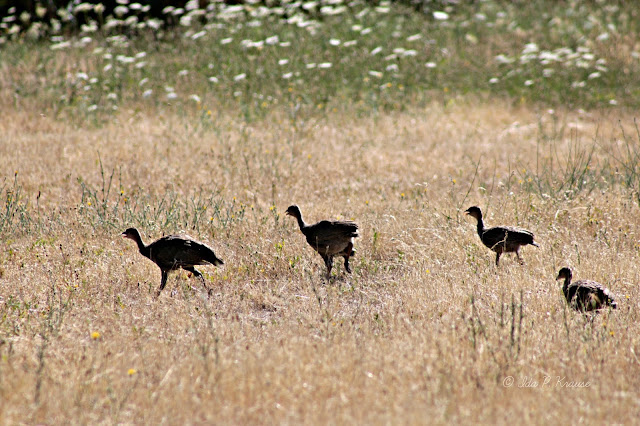 A couple of the adults and some of the baby turkeys.  There were lots more but they were moving quickly and it was hard to get decent shots of them.
3. Enjoying some of the summer fruit readily available in this area.  Yummy Blackberry Pie with Vanilla Ice Cream.  Doesn't get much better! 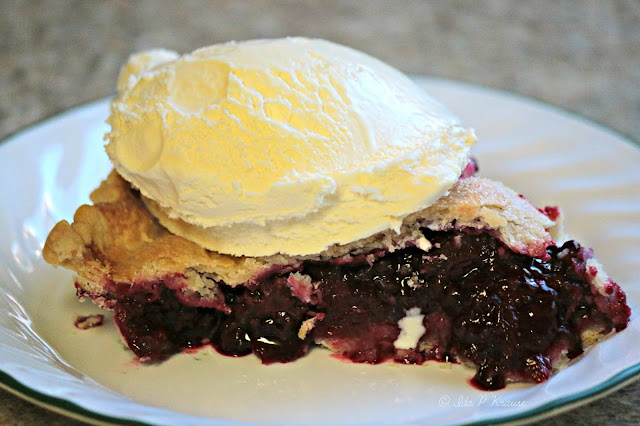 4.  I like to do Black and White shots now & then.  This is a Cherry Orchard and wind turbine. 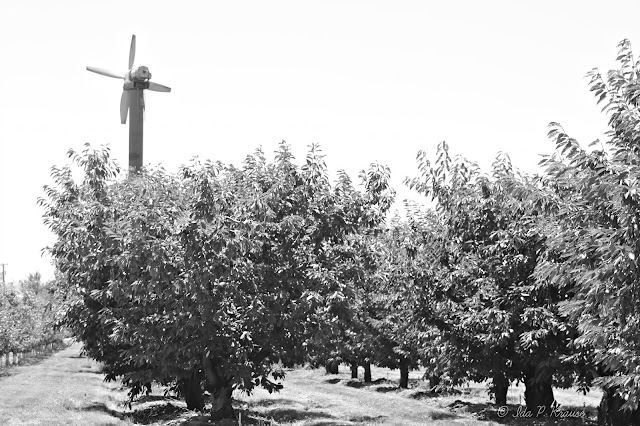 5.  Out on another drive.  Had to take a shot of the baled fields. 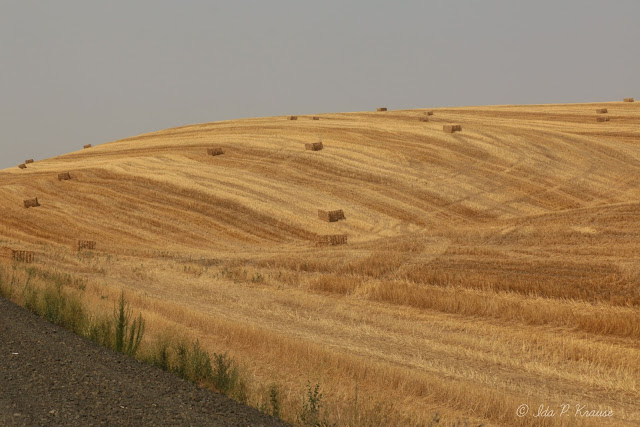 6.  I liked the way this building looked and the cool sculpture in front of it.  Will share a better shot of that at a later date. (Got to give you something to look forward too).﻿ 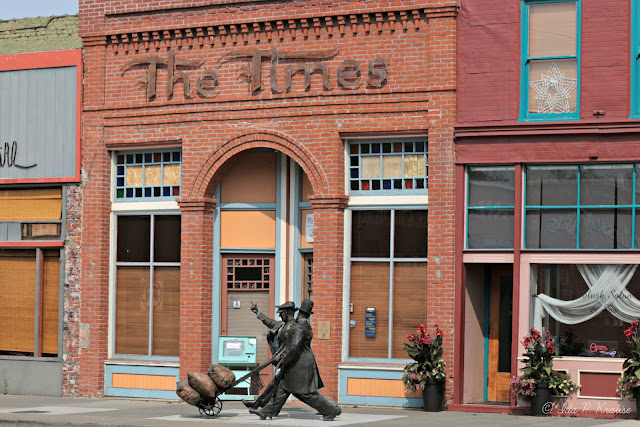 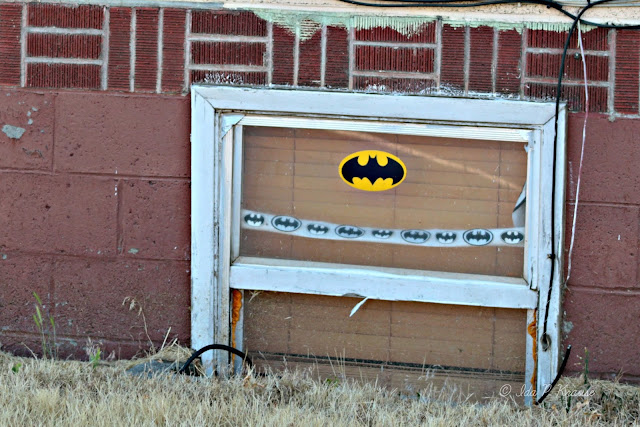 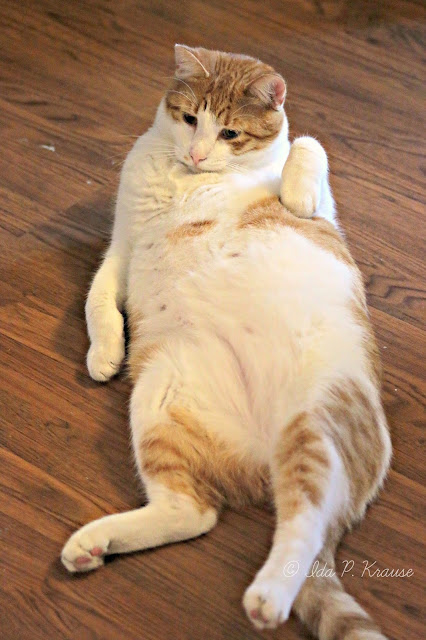 It's "Speedy G" showing off that magnificent belly!
Posted by Ida at 11:42 AM 16 comments: