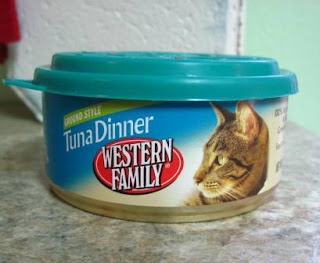 You know I was thinking today (yes, I sometimes actually put my brain to work) about how we often pass by the "little" things in life waiting for the BIG moments to happen before we comment on them.  What a shame as sometimes those little moments are often the ones we remember the most later in life.

For example:  About a week ago one day for lunch I was eating a Mexican TV Dinner and it had gotten a bit cold since I eat and look at e-mails at the same time.  So I went in to re-heat it.  While I was in the kitchen I noticed the dish of cat food that I had brought in from outside so that it could thaw out.  - We feed neighborhood strays and basically any cat who wants to come out for a snack.  With the freezing temps the soft food had frozen so I brought it in to thaw it out and give it to our cats inside.
I chomped it up and put it out on plates for them to eat and then went and got my food out of the micro-wave.  I picked up my spoon and decided to lick it off before I stirred my food again.

Now can you tell where this is leading yet....As soon as I licked the spoon off I realized what had happened. It was "icky" CAT FOOD on the spoon.  I was trying so hard not to gag and grabbed up a cup of water to quickly rinse my mouth out (several times) all the while still trying not to gag as that stuff tasted horrible.  I even had to go rinse with Listerine just to be able to finish eating my lunch.  To make matters worse I decided to call hubby and tell him about it.  He about died laughing.  So now since the story is out he and our daughter start "meowing" at me when they see me with a spoon or the cat food cans.  Lots of jokes come from dumb things like that.  I have to admit it was funny (and gross at the same time).  I'll be sure to check my spoon from now on before I lick it off!

So let's not forget to share even those "little" moments that make up our lives.
Posted by Ida at 9:23 AM