Harley and his Surgery 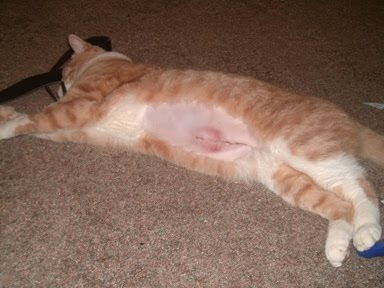 Wow what a week it's been. One of our cats, Harley suddenly stopped eating and drinking water for no apparent reason. It started on Friday and he steadily got worse and by Sunday evening we were concerned enough to call the Emergency Vet. They didn't seem to think it was at that point "life-threatening" since he was eating a teeny tiny bit and was still urinating and not vomiting. On Monday of this week we decided to take him to the Vet. Given his "history" of eating things he shouldn't we figured it best that he be looked at. The Vet took blood work and x-rays but couldn't see anything conclusive that he didn't have some kind of a blockage in his intestine's or stomach. She sent him home but said if he wasn't showing improvement by morning to bring him back and she'd do exploratory surgery to find out if there was something going on inside his stomach/bowels etc...so Tuesday morning he headed back to the Vet and had surgery again. We were able to bring him home today and I am happy to report he is doing much better. He's eating now and drinking water again so even though there wasn't a huge problem the work the Vet did apparently cleaned him out enough that he's able to eat and go to the bathroom again without any problems.

It's been stressful to say the least as we think of all our cats as "furry children" and we don't want anything to be seriously wrong with them. Now it's just keeping him on a (soft cat food diet) for a few days and getting his meds down him that we have to worry about. So far so Good!
Posted by Ida at 9:06 PM