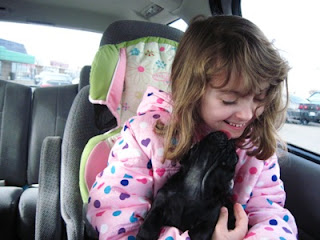 Well it's official now as we got another dog.  Mike and I swore that we would not get another dog after Angel passed away.  Somehow though that didn't last long.  For one thing Coleen wanted a new dog so badly and when she told me that she had prayed to Jesus to change Grandpa and Grandma's minds I knew it was a losing battle.  Plus to tell the truth I missed the thought of not having a dog around.  I'm mainly a "Cat" person but for the past 19 years I've been around dogs and well it just seemed so lonely looking out in the Dog Pen and not seeing a dog there.  So after some pleading and coaxing to hubby he agreed to let us get a new dog.  It had to meet certain criteria though. 1. No long haired dogs. 2. It needed to be a female 3. We decided on a small dog and 4. It had to be good with children.  So while searching the Internet for puppies I happened upon a picture of a sweet little black puppy that was available right away.  I called and made arrangements to drive over on Saturday morning and pick the puppy up.  Coleen was so excited she could hardly wait until the owner arrived at the designated meeting place.  It was "Love at first sight" or should I say "first lick!"
So who is this new little bundle of energy?  We'd like to introduce you to....
Cricket Krause 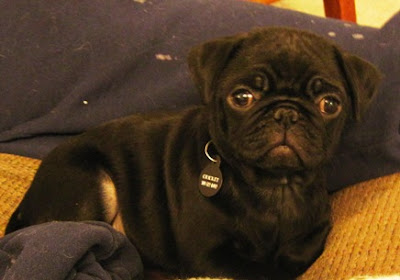 Isn't she adorable looking!
She is certainly a bundle of energy and oh so cuddly and lovey.

The cats were not so thrilled about the new addition and you can see they were really checking her out in the carrier after we got home in the following pictures. 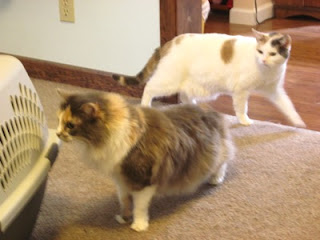 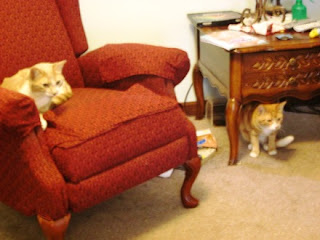 They all ran from her every time she got near them.  It was comical because all of them are so much bigger then she is.  Slowly but surely they are warming up to her so I think in a few days all will be right in their world again. 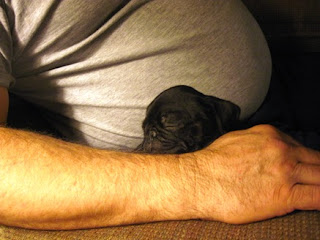 Here she is peacefully asleep on Mike's lap Saturday night.

Coleen adores her already.  You can see that in the next picture and in the fun little video we took of her and Coleen.

Alot of people might think it was too soon to get another dog after Angel's passing just barely a week ago but we feel that we have our wonderful memories of Angel and that we have love to give for another dog and so we opted not to wait.
Cricket is already becoming a well loved family member.  We hope you will enjoy her to as we begin our new journey with her as a family pet. 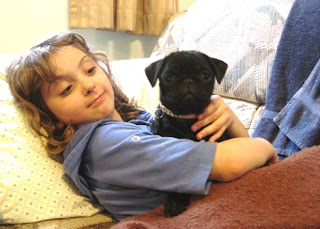