What can you do with a Bean? 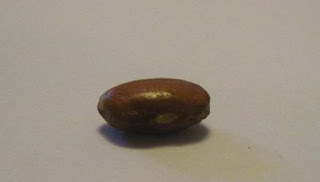 It's small and really not all that interesting but oh my what a day this bean had.

I'm sitting at the computer when the phone rings.  I answer and it's the nurse from the school Coleen goes to.

She proceeds to tell me that Coleen has apparently put a bean in her ear and she is unable to get it out!  Okay kids do these kinds of things but when asked why Coleen tells everyone that she can't remember why she did it. Of course I had to call her mom and she ended up taking time off from work so we could take Coleen to the doctor.

We get there and there is another woman with her son just ahead of us in line at the Walk-in-Clinic.  They register and sit down.  Then it's Greta's turn and she tells the receptionist what happened as says that she's embarrassed about the fact that Coleen put a bean in her ear.  Suddenly this other woman starts laughing and then proceeds to tell us she's there because her son got part of a Q-Tip stuck in his ear!  How funny.  Best part was that he was older then Coleen. I'd guess around 8-9 years old.  So at least Greta knows that it just wasn't her kid doing something dorky.

Coleen was scared it would hurt to get the bean out and did a little bit of crying while waiting for the doctor but in the end he had the bean out in no time flat and she recovered quickly from the trauma and even went back to school.  Later after she got home she said that everyone at school learned a lesson today about not sticking things in their ears, nose or eyes! (Guess the teacher used her as an example of what not to do).

Ah the joys of childhood!
Posted by Ida at 9:39 PM