Happy Friday! -  I'm a bit "sad" today as I know that Nancy (A Rural Journal) is not posting Random5Friday and Tanya (Around Roanoke) apparently isn't doing Willy-Nilly Friday 5 right now either.  What's a girl to do?......Post 5 Random Things Anyway!!!!

Click to enlarge photos.  Some photos are not related to my 5 Random Things and I gave them titles as well. 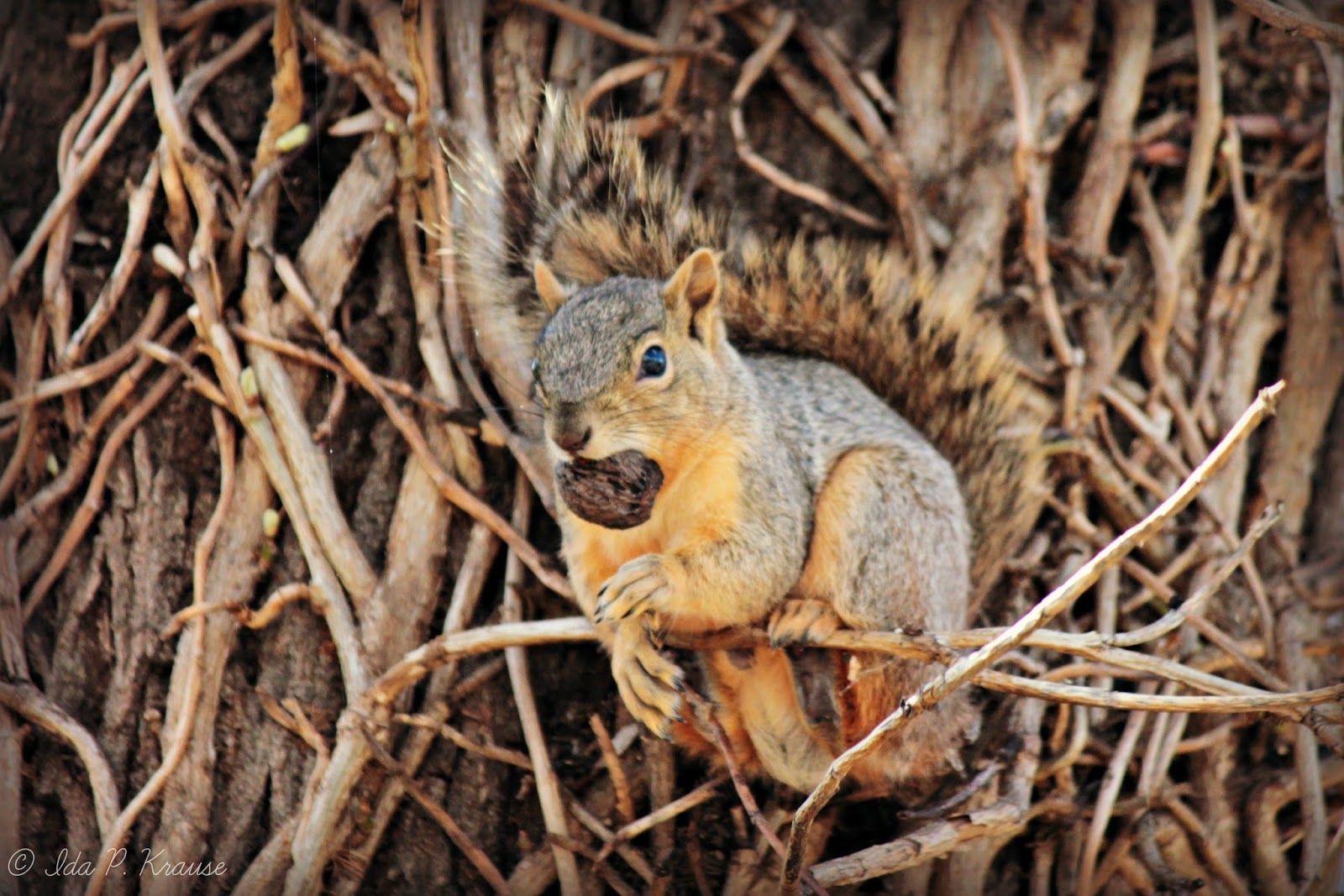 CAMO SQUIRREL
Coleen and I spotted this guy on a tree surrounded by twisted branches from another plant growing on the tree.  It has a nice tight grip on that nut in it's mouth.  Sure blends in with the surroundings.

1.  This week I saw something that really shows the times are changing.  It was a form where you check off stuff like if you are married, single etc...Under Gender it had boxes for:  Male,  Female & Other! 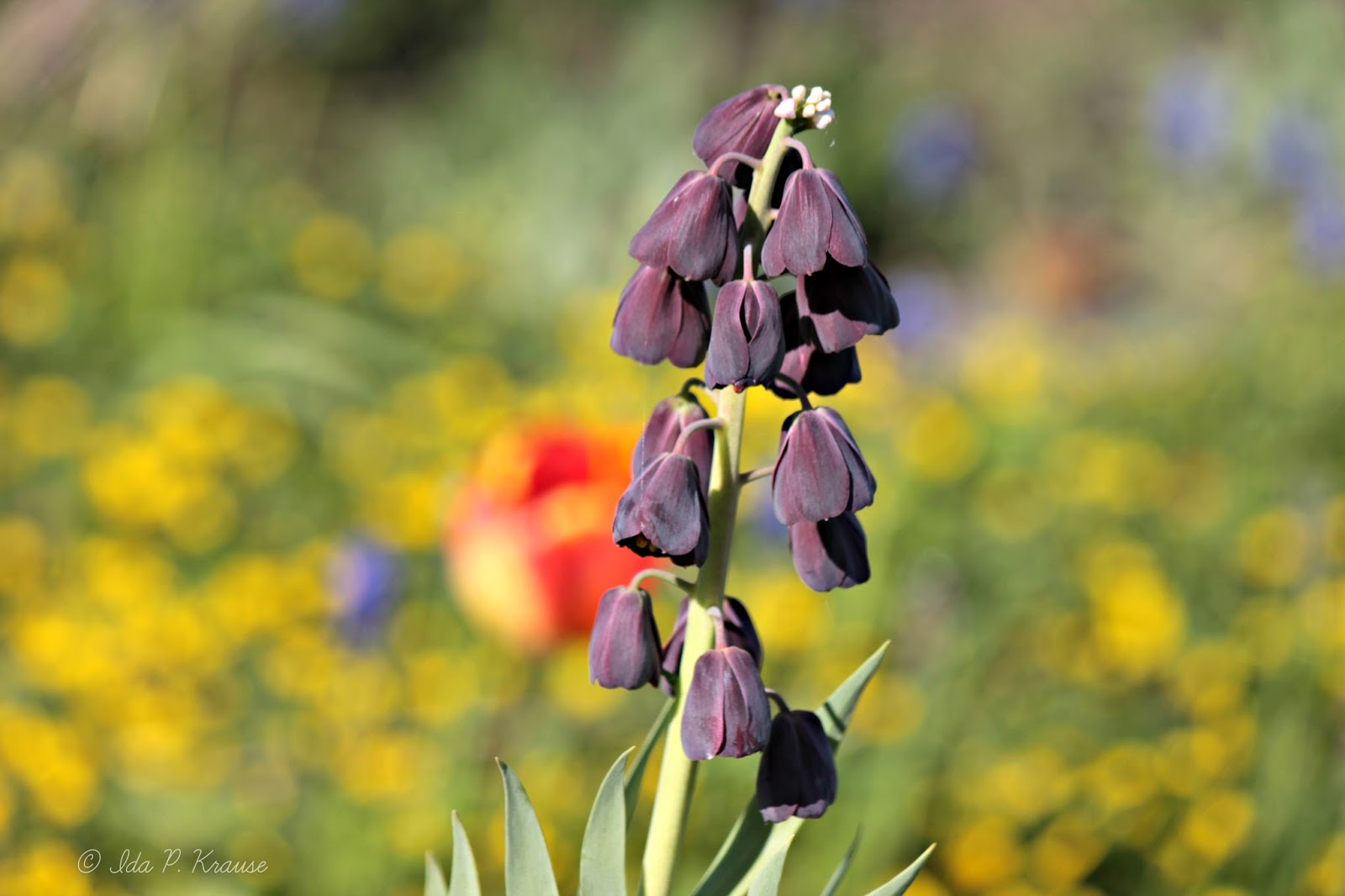 COLOR ME PURPLE
Coleen and I spotted this deep purple flower growing in someone's flower bed while on one of our walks.  It was different so I snapped a picture of it.

2.  People will steal just about anything.  Last night there was a little blurb in our paper about some people here in WA state that went to their cabin in the wood only to discover that someone had stolen the entire cabin off it's foundation! 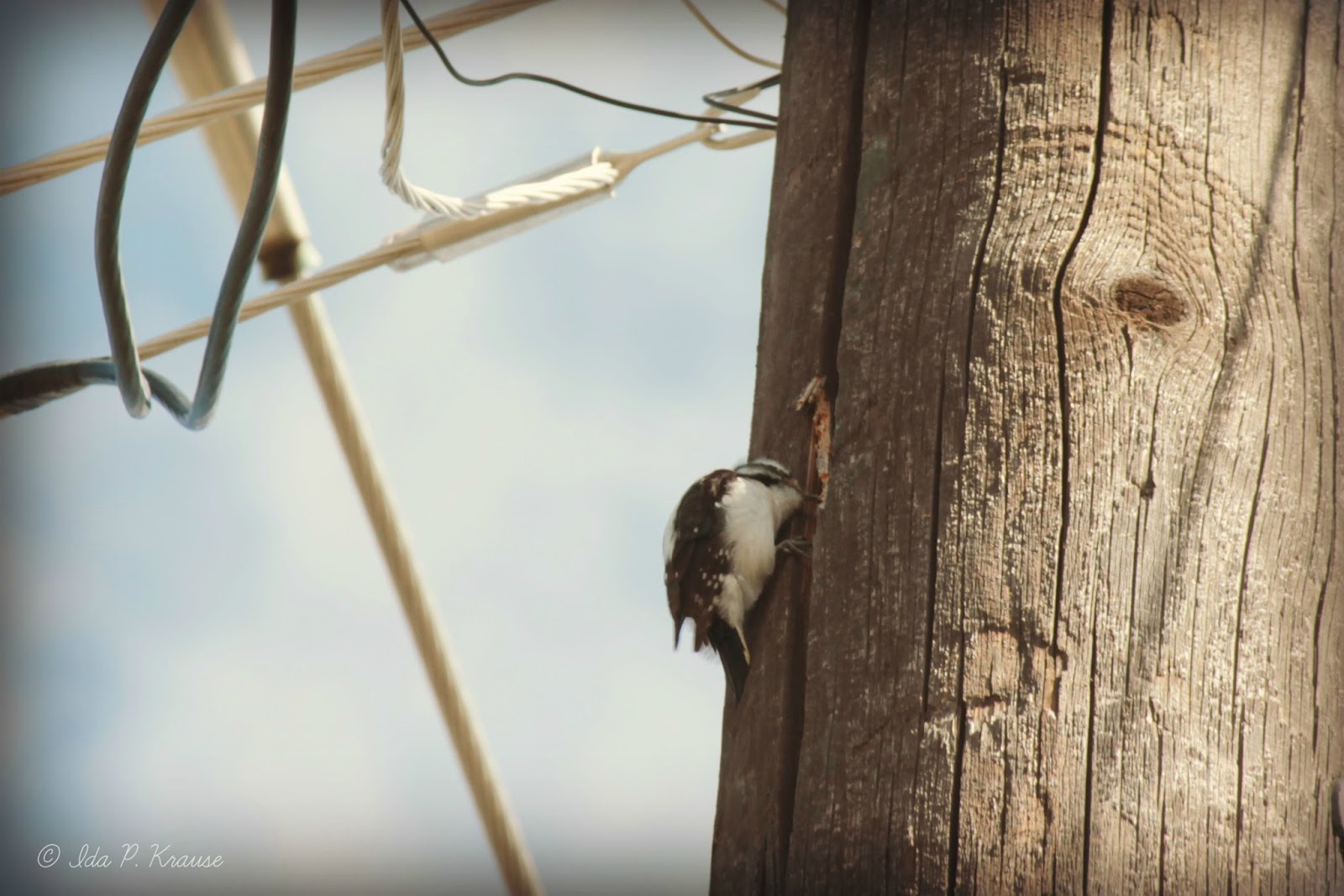 3.  Every year a woodpecker arrives come spring and pecks away on the same telephone pole for at least 45 minutes. Usually in the morning when I'm trying to sleep! 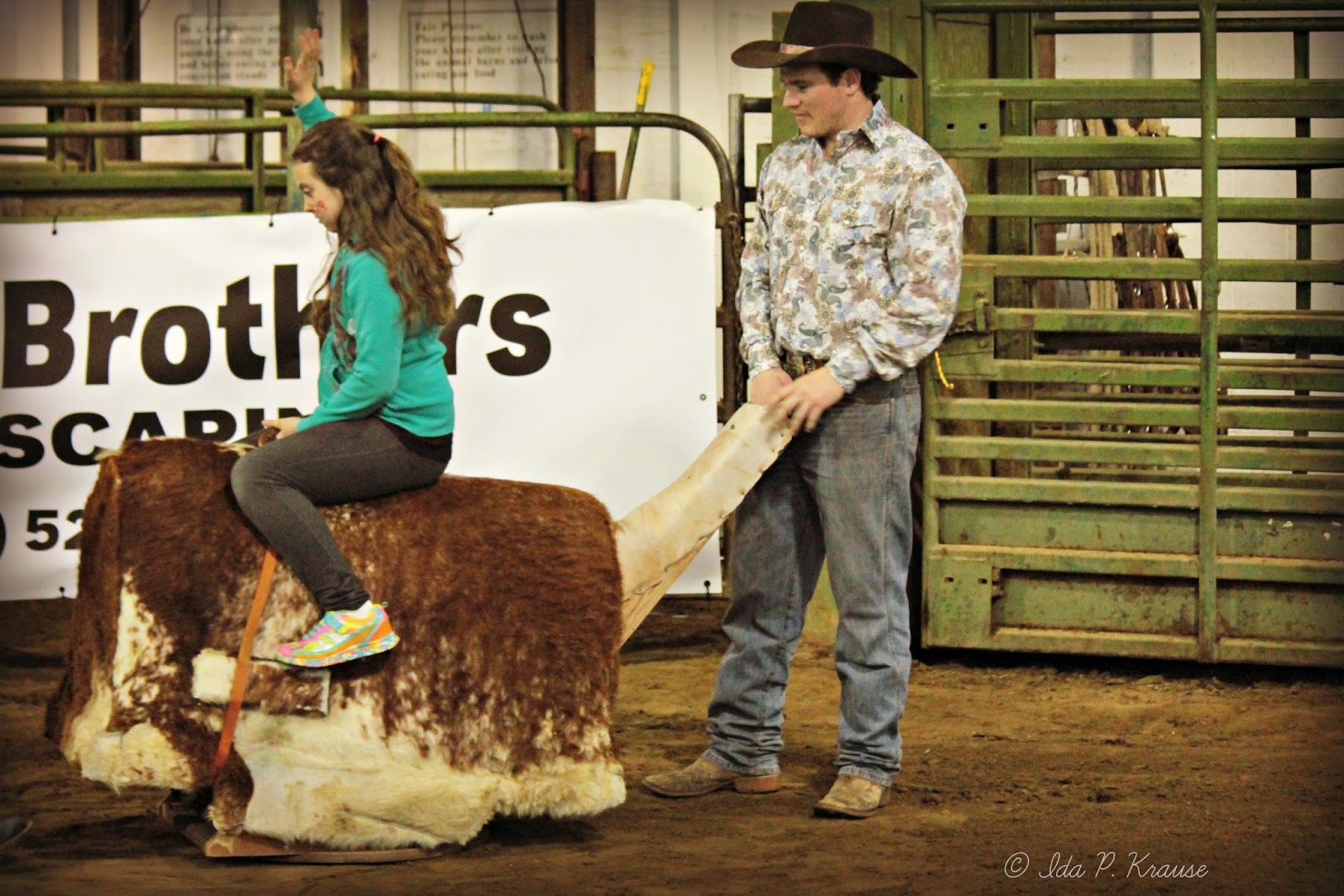 THE LONGEST RIDE
Coleen taking a ride on the "bull" at the Kid's Rodeo a few weeks ago.

4.  Has anyone seen the movie,  "The Longest Ride" which just came out this past week?  -  I'm a huge fan of watching PBR Bullriding and I just finished reading the book (The Longest Ride by Nicholas Sparks).  I enjoyed the book but thought it to be a bit "far-fetched" in places so I'm debating about whether or not to see the movie.  I think I'll wait till it comes out on a DVD rather then spend a lot money to see it at the Theater.

5. Last week I featured a cat photo and asked people to leave a caption for it.  Here is the photo again....with the winning caption. 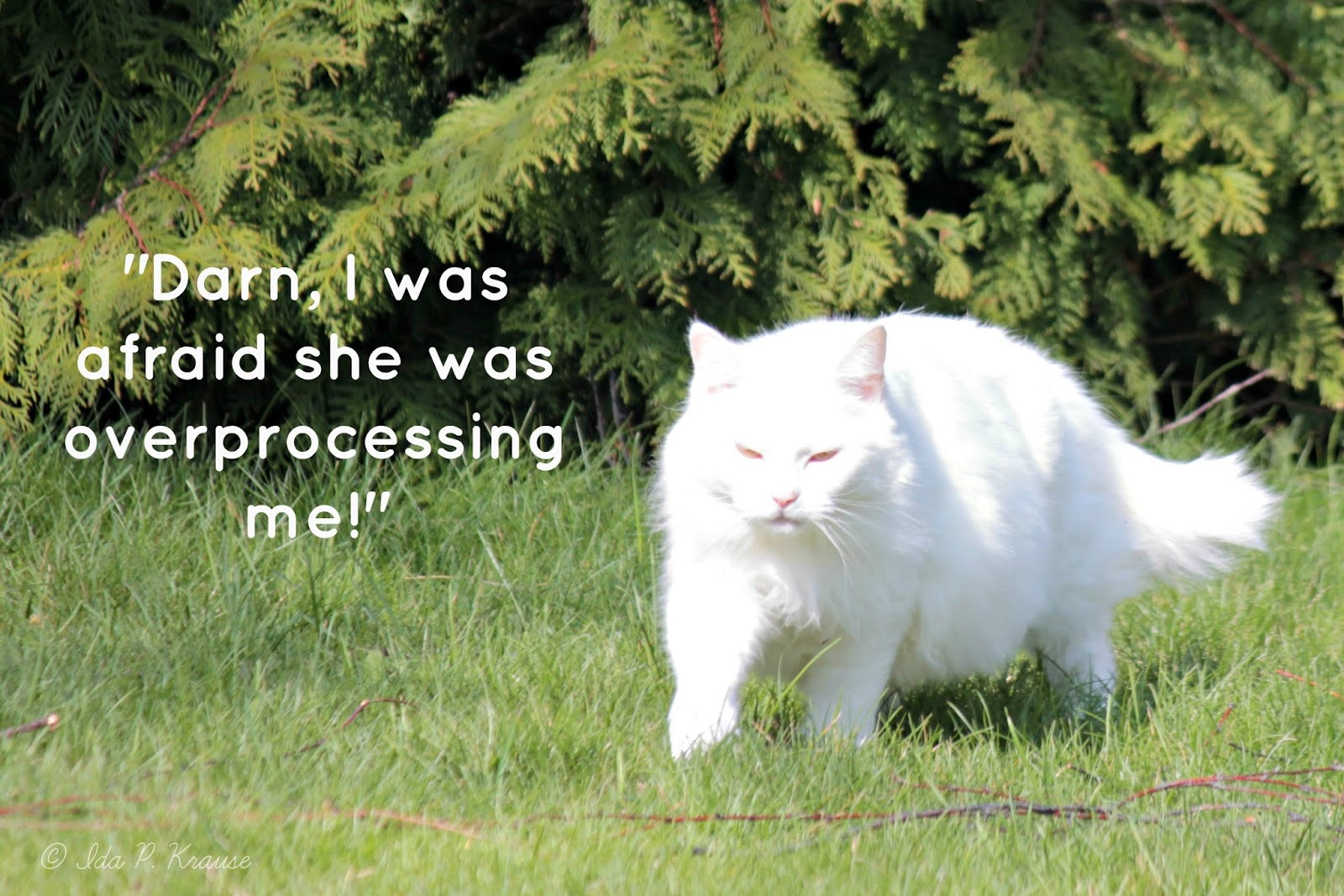 I want to thank everyone who did leave a caption.  There were quite a few and several that I really liked.  My favorite though came from Jeanne who blogs at (Butterfly Tales: Metamorphosis).  Congrats Jeanne for a very funny caption.﻿

So I am going to do this every week and call it,  Caption This.  I'll feature the winning caption the following week with a shout out to the person who I think gave the best caption.  I might do polls to let people vote (if I can figure out how to do that) and maybe even offer a prize once a month for the best caption out of all the photos I feature that month.

With that said here is this weeks photo for Caption This. 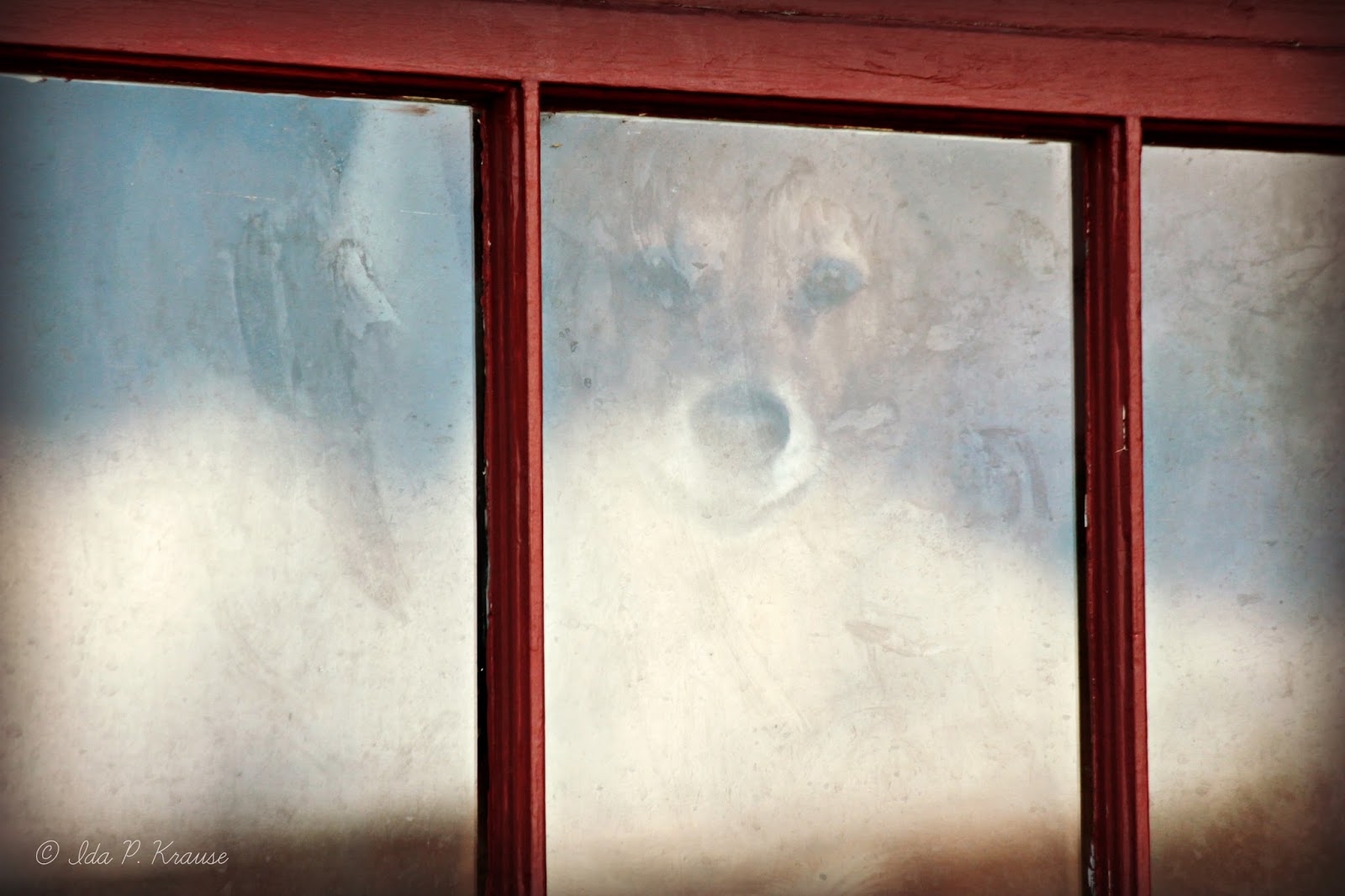 Coleen & I heard some barking while on our walk and we spotted this in the window of a house we passed by.

So that's it for me this week.  I'm forgoing a few of the Meme's I usually participate in on Friday as it's Spring Break and I've got Coleen to entertain.

Have fun with the captioning of the photo.
Posted by Ida at 9:59 AM